It’s the little things that also count on safari.

Guests are always eager to get on their way in search of The Big Five. Seeing these sought after animals is one of the main reasons why they chose a safari holiday. Cameras snap away as they spot lions, elephants, buffalos, rhinos, and if they are lucky enough, the elusive leopard. But, what about the little guys?  Sometimes, we also need to make a fuss about the smaller things in life.

These feisty five didn’t get their collective title just from being small. Their names each also contain references to the Big Five animals.

Starting off with the smallest member of the group we meet the Ant Lion. Young Ant Lions live most of their lives underground and they give away their location by leaving unique inverted cone-shaped pit falls on the surface of the ground above them. Ant Lion larvae create these traps to catch other insects such as ants or termites, and once their prey fall in these traps the Ant Lion will strike quickly with its enormous steel-like mandibles and drag the victim under the sand.

This cute tiny creature is probably the hardest to find due to its small size and skittish nature. The Elephant Shrew inherited its name from the elephant because of its extended nose which comes in exceptionally handy. They use their noses, as well as their large ears to detect predators and prey.

So, you think elephants are strong? Then you haven’t seen the Rhinoceros Beetle in action.  It lifts 850 times its own body weight which is more than any other animal recorded. The male Rhino Beetles have signature horns on the top of their heads, very similar to a rhinoceros. They use their horns to dig underground and to fight other males for the right to mate.

The Red-billed Buffalo Weaver is a busy, noisy bird. Nesting is not their strong point, as their nests are untidy masses of twigs, usually found in dead trees around waterholes. Although they are called buffalo weavers, they actually have very little interaction with buffalo.

Ending off with the biggest of The Small Five, the Leopard tortoise is one of the largest breeds of tortoise in Africa. It can live for up to 100 years. It gets its name from the beautiful yellow-and-black spotted patterns on its shell which look similar to the markings on leopard’s coats.

These remarkable creatures might be small and sometimes a bit difficult to find, but they are magnificent in their own right. Make the small things count and make sure to keep an eye out for Africa’s Little Five the next time you’re on an African safari.

For help planning your family safari, get in touch with us, or download our free eBook, The Ultimate Safari Planning Guide for Families. 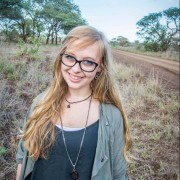 Born and raised in the bush in South Africa, Claire has grown up with a deep love for wildlife and enjoys nothing more than immersing herself in nature. When she's not barefoot outside, she can be found at her computer blogging about adventures and editing her photographs.